A doctor decided to cure his profoundly deaf patient by taking him to see Fernand Cortez.  The doctor’s unorthodox treatment succeeded.  At the end of the opera, the man could hear – but the doctor, his eardrums battered by hours of sound, had gone utterly deaf.

The joke, of course, is that Fernand Cortez was the noisiest, most bombastic thing ever put on a stage up till then: three hours of military marches, choruses on-stage and off-stage, massed bands, with cavalry charges and exploding ships.

This – and not Meyerbeer – was what Wagner wanted to outdo when he composed Rienzi.

Napoleon commissioned the opera as a propaganda piece to drum up support for his campaign in Spain in 1808.  For Cortez, ending the bloodthirsty cult of Talepulchra (Tezcatlipoca), read Napoleon, liberating the Spanish from the Inquisition.

It was an enormously expensive undertaking.  An unprecedented 180,000 francs were spent on the opera, with 10,500 alone on harnesses and costumes for 17 horses and their riders. The massive orchestra bristled with Mexican and military instruments, including timpani, bass drum, tambourines, cymbals, triangles, tam-tams, and the Mexican gourd rattle (ajatazily).  The designers Cicéri and Degotti studied Mexican plants and animals, and Aztec costumes and weapons.

And it was pulled after a mere 13 performances – partly because the French were against the brutal Spanish campaign and sympathised with the Aztecs, partly because the triumphalist presentation no longer suited Napoleonic propaganda.

Spontini’s librettists themselves had misgivings about the work.

“I thought it my primary duty to represent the spectator with a natural exposition, and compel him to pity the fate of the Spanish prisoners, in order to soften the odious aspects of their victory later on,” said Étienne de Jouy.  (Even in 1809, colonialism was not ipso facto a good thing.)

“Between the sympathy inspired by the temerity and audacity of the conquerors, and that felt for the miserable fate of the conquered, the soul remains uncertain and, as it were, suspended.”

One early fan was Hector Berlioz.

“Cortez was given yesterday at the Opéra,” he wrote to Spontini.  “Still shattered by the terrible effect of the mutiny scene, I come to shout to you: Glory! glory! glory and respect to the man whose powerful thought, heated by his heart, created this immortal scene!  In any production of art, did indignation ever find such accents?  Was warlike enthusiasm more ardent and more poetic?  Has anyone ever shown in such a light, painted with such colours audacity and will, these proud daughters of genius?  – No!  …  It’s beautiful, it’s true, it’s new, it’s sublime!”

Critics both then and now have been less impressed.  Blaze de Bury thought it vastly inferior to La vestale, itself an old-fashioned, pompous work.  David Charlton calls it “a Napoleonic juggernaut rolling with unique and repellent power, bludgeoning the listener”, while Richard Wrigley (Art, Theatre, and Opera in Paris, 1750 – 1850: Exchanges and Tensions) terms it an “extraordinarily expensive, overtly militaristic, bombastic and colonial opera”.

Edward J. Dent (Rise of Romantic Music) is rather severe when he says it “is little more than a string of military marches, interspersed with a few dances in the polonaise style”.

The score is decidedly uneven, true, but there are some beautiful things in it: the Introduction, with the haunting “Champs de l’Ibérie! ô douce patrie!”; and the a cappella Hymne.  The intimate scenes are weaker; most of Amazily’s music is fairly dreary, while a lot of the story is conveyed in unexciting recit.

The big public scenes – the Act I finale; the revolt, the famous burning of the ships, the rallying of troops in Act II – would make an impression on stage, particularly with enough money thrown at them.

Several of the conventions of grand opéra are already here: an exotic, historical setting; conflict between two cultures; a love affair crossing those cultures; the chorus as a protagonist; public ceremonies; even a bass priest.  Many of these elements occur in de Jouy’s libretto for the Guillaume Tell of Rossini, who, like Meyerbeer and Berlioz, learnt from Spontini’s grasp of musical space and use of large orchestral and choral forces.

For all its impressive spectacle, though, the opera’s cardboard characters, lack of heart, and glorification of military conquest make it hard to love.

Grand vestibule of the temple, with at the back two doors leading to the underground enclosure where the prisoners of war destined for sacrifice are held.

Alvar, Cortez’s brother, is prisoner, and the Aztec priests want to put him to death.  Montezuma resists.  Amazily, the king’s sister, has become a Christian; she loves, and is loved by, Cortez.  She comes to plead with her brother to spare the captives; she speaks of peace; she knows that the step exposes her to danger from the priests – but the danger is nothing, her king and her country above all else.  Télasco reproaches his sister for her infamy, but she tells him that her mother was sacrificed to false gods.  We hear a great thunderclap.

The priests announce to the King ominous omens, but the Spaniards approach.  Amazily promises to stop their advance if the captives are spared.  Montezuma wants her to return to Cortez, to speak of truce.  Her brother Télasco accompanies her; the Mexican soldiers arrive; and all prepare for combat.

Spaniards weary of the campaign miss their country.  Moralès tells Cortes of the soldiers’ bad mood, and announces the disappearance of Amazily.  She soon returns; she has diverted the blows directed against Cortes’ brother.  – Entrance of the Mexican envoy; he gives the Spaniards presents; he comes to offer peace in the name of the king, but if Cortez resists, it’s all up with the captives.  The Spaniards seem to applaud Télasco’s speech.  To completely demoralise them, he gives the signal for a party.

Spaniards overcome by pleasure start to mutiny; but Cortez and Moralès resists them, and wish to stay on the beaches.  This steadfastness makes the Spaniards return to duty; they implore their forgiveness, and throw away the enemy’s gifts.  Cortez secretly burns his ships.  At the sight of the burning fleet, Cortez tells his people, pointing to Mexico in the distance: “Here is the only hope that remains to you!”

Underground tomb of the Mexican kings

Montézuma has ordered Alzar released, but the people, stirred up by the priests, oppose him.  They want Amazily to die for betraying their gods and their country.  It is in vain that Cortez’s lover wants to devote herself to her country.  Cortez orders Moralès to sound the trumpet announcing the combat, but Amazily wants to run to her death.

The Spaniards are victorious.  Montézuma arms the soldiers with torches to set the city on fire, and leave nothing in his enemies’ hands but ashes.  He sits on his throne awaiting death, but Amazily tells him that Cortez will not abuse his victory; he wants to give the vanquished an honourable peace.  Triumphal entry of Cortez.  He presents his hand to Montézuma as a sign of friendship.  The Mexican king, to reward such greatness of soul, unites him to his sister.  Final feast of the two nations. 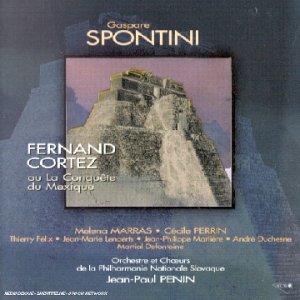 Whether the libretto wasn’t interesting enough, or the public wished to devote to La Vestale an exclusive worship, the opera of Fernand Cortez was not a success; only 24 performances during its first seven years.  There was a luxurious outlay on costumes, sets, horses, and so on.  The mutiny scene is an immortal masterpiece; we will also mention Amazili’s aria, sung by Mme Branchu.  Lainez and Lays played Fernand Cortez and Télasco.  The reprise of this opera took place on 28 May 1817 with more success than the first time.  Spontini had revised his score, and, since that time, Fernand Cortezhas had several brilliant performances.  It was also represented in Stockholm in May 1826, then again in 1838; in Vienna in September 1854, with Steger, Berk, Muller and Mlle Lagrua, and obtained an immense success.  The cast was as follows: Telasko, Beck ; Amazili, Mlle Lagrua ; Fernand Cortez, Steger.