The Palazzetto Bru Zane recently published the world première recording of an opera admired by Berlioz and Wagner: a tale of politics, thwarted love, and chivalry in the fifteenth century.

In his day, the Jewish musician was seen as the leader of the French school – France’s greatest opera composer from the 1830s to the 1850s. He was, like his fellow Jew Meyerbeer, a master of both grand opera and opéra comique, loved throughout Europe.

Today, he is only known for one opera, La Juive (1835), an intense work about religious persecution which Mahler, among others, thought one of the greatest operas ever written. (And, yes, the default banner is the set design for Act I.)

La reine de Chypre was one of Halévy’s biggest successes. It ran for more than 150 performances at the Paris Opéra alone. 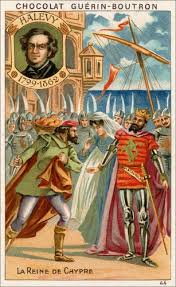 Berlioz admired the “vast and splendid composition”, as he did many of Halévy’s other operas.

Wagner devoted more than 9,000 words to praising a monument in the history of musical art. He held Halévy up as a model for German composers to follow.

“His vocation is to write music as it springs from the most intimate and profoundest depths of human nature.”

What distinguished Halévy’s style, the German Titan thought, was his passionate gravity, the intensity of his thought, his concentrated energy, and his truthfulness.

Félix Clément thought it had perhaps the best libretto of all modern operas, full of dramatic situations that the composer rendered with power, profound skill, and exquisite sensitivity. While perhaps less brilliant than La Juive, the score was admirable from start to finish, and perhaps Halévy’s most tuneful work.

And, of course, like nearly all Halévy’s operas, La Reine had vanished almost completely, leaving behind only two early recordings of part of a duet, and Wagner’s piano transcriptions.

The great Hall of the Villa Andrea, near Venice

The Venetian patrician Andrea Cornaro has promised his niece Catarina to a French knight, Gérard de Coucy.  The Council of Ten have other ideas, however, and order Andrea to break off the engagement, and give Catarina to Jacques de Lusignan, king of Cyprus. Andrea hesitates, and only yields when Mocénigo threatens both him and Catarina.

The highlight of the act is the finale, where Andrea forbids the wedding. Wagner considered it one of those masterpieces where Halévy’s talent unfolds in all its power, passions unleashed like a tempest, while Berlioz thought the stretta one of the most beautiful things Halévy had ever written.

Catarina, alone in her room, listens sadly to the gondoliers.

Their chorus was one of the most admired pieces in the score, often encored, but is not in the Bru Zane recording. Berlioz called it “a small masterpiece of melodic freshness and originality… It is the calm and serenity of Italian nights, it is the soft rocking of the silver waves by the moon, it is repose, it is happiness!”

She finds a note from Gérard; he will call on her.

“The magnificent scene,” Clément wrote, “is deeply melancholy. No other composer has expressed that feeling as well as M. Halévy. It was the very bottom of his soul.”

But her first visitor is Mocénigo, accompanied by assassins. Unless she renounces Gérard, and tells him that she no longer loves him, they will murder him. To save her lover’s life, Catarina is forced to lie.

Wagner thought the parting duet one of the most striking in all theatre. The stretta – the voices choked with emotion – was electrifying in the concert hall.

The Gardens of the Casino at Nicosia

Gérard has come to Cyprus. Mocénigo orders assassins to kill him; an unknown man (really Lusignan) rescues him. The stranger will  not reveal his identity, only that he is, like Gérard, French. The two men swear eternal brotherhood, and praise their country. The guns sound for Catarina’s arrival.

The act ends on one of the opera’s two best numbers, the duet “Vous qui de la chevalerie”.  Wagner called the cantabile section “Triste exile” a precious pearl in the rich setting of this score. “Deepest feeling and knightly courage at its most male and exalted are fused here in one and the same melody with an unequalled art, whose simplicity of means enhances still further its merit.”

The great Square of Nicosia

Lusignan and the Queen land on the island. The cortège passes, and the party begins. Gérard has sworn to kill Catarina’s husband – but, at the moment of striking him, he recognises the stranger to whom he owes his life. The crowd call for Gérard’s death, but Lusignan, generous, saves it a second time.

Tableau 1: The private apartment of the King of Cyprus

Several years have passed. Gérard has become a knight of Rhodes; Catarina is nobly resigned to her fate; she is a mother. Lusignan is dying, slowly poisoned by Venetian agents, because he will not be their puppet. Gérard comes to warn Catarina of the plot formed against her husband’s life.

In what Clément considered one of the most beautiful scenes in all opera, a masterpiece, he learns how Mocénigo forced her to renounce him. “Noble feelings, restrained passion, and pain are expressed sublimely.”

Berlioz also praised it; “the ardent love and secret sorrow,” Berlioz wrote, “of these two wounded hearts are superlatively rendered”.

Mocénigo appears, and says that Catarina must hand over power to him, or he will frame them for the crime. Lusignan hears the threat, and has the Venetian arrested – but not before the scoundrel signals to the Venetians to attack the city.

The confrontation supplies the subject for the great quartet.

Wagner thought it the most sublime piece in the score. “Here, more than anywhere else, Halévy’s talent shows itself in all its individuality; the grandiose is allied with the terrible, and an elegiac melancholy spreads like a funeral crêpe over this solemn scene, with that clarity, that simplicity, peculiar to the great masters.”

Tableau 2: The Square and Port of Nicosia, seen by moonlight

The Cypriots, led by Catarina and Gérard, drive out the Venetians. Lusignan, almost dying, comes out to fight, but dies in Catarina’s arms. She shows their son to the people, who acclaim her as sovereign. Gérard returns to Rhodes.

When I heard that the work would be performed in Paris last year, as part of the Palazzetto Bru Zane’s mission to resurrect French Romantic music, I bought tickets at once. I flew to the other side of the world to hear the first performance in more than a century.

Afterwards, I stood outside the Palais Garnier to pay my respects to the bust of Halévy.

It’s opera for adults: a sober, intimate work that shows at once love destroyed by political machinations, and the redeeming power of honour and friendship. Unusually for opera, which often ends with lovers’ deaths, here the couple survive, but must live forever parted, wedded to duty (a kingdom, a faith). The score is magnificent, tender and exciting, amply justifying Berlioz, Wagner, and Clément’s praise.

My thoughts at the time:

A rediscovery!  Véronique Gens in magnificent, warm voice; dynamic conducting by Hervé Niquet (he seemed to have springs in his heels); and Halévy’s music added up to a wonderful evening.

This is on a par with most Verdi.  Very tuneful, imaginatively orchestrated (parts remind me of Berlioz), monumental choruses and ensembles (the Act I finale has the cataclysmic effect of Verdi’s Dies irae), alongside more intimate scenes.  Highlights include Catarina’s aria in Act II, the lovers’ duet in the same act, the duet from tenor and baritone at the end of Act III (this includes “Triste exilé”, the only recorded piece from the opera), and the quartet in the last act.

Despite an inadequate tenor (the poor chap was a replacement; he’d only seen the part that morning), the audience was enthusiastic, and thought the opera was wonderful.

Halévy can still please an audience – if only he were given more of a chance.

Bru Zane published a CD/book last month, filling a gaping hole in the catalogue. The opera was re-recorded, with Cyrille Dubois singing the tenor part.

It is a beautiful recording of a lost masterpiece. Your support will also contribute to Bru Zane’s work – and hopefully lead to more Halévy operas being resurrected.

Disclaimer: I am not affiliated with Bru Zane in any way.

The great Hall of the Villa Andrea, near Venice

The Gardens of the Casino at Nicosia

The great Square of Nicosia

Tableau 1: The private apartment of the King of Cyprus

Tableau 2: The Square and Port of Nicosia, seen by moonlight