This is for Phil.

The scene of Lakmé is laid in one of the large cities of India, and in its immediate vicinity, recently subdued and occupied by the English.

The opening takes place in the grounds of Nilakantha, a Hindu priest, whose premises it is considered criminal and worthy of death to profane.

Lakmé and her servant Mallika go down to the river to gather flowers.  They sing the famous “Flower Duet”.  As they approach the water, Lakmé removes her jewelry, and places it on a bench.

A small party of English ladies and officers of the British army find their way thither while strolling about for amusement.  They force an entrance through the bamboo enclosure, and, while admiring the beauties of the place, come upon some beautiful jewels which have been laid aside for the moment by the daughter of the Brahmin proprietor.  Realizing the impropriety of their presence, they turn to leave ; but Gérald, one of the officers, and the lover of Ellen, daughter of the governor, wishing to make a sketch of the jewels for the benefit of his lady-love, remains behind for that purpose while the others depart.

Upon reflection he decides to relinquish the idea of copying the form of the jewels, and in the moment of leaving is surprised by the sudden appearance of Lakmé just returning from a little excursion upon the neighboring stream.

They are mutually struck by each other’s presence, and, seemingly, a case of love at first sight is the result.  Lakmé demands how and why he came there, and tells him of the death penalty which must follow such intrusion.  Gerald expresses his admiration of Lakmé’s beauty, and hastily departs, or conceals himself just as the priest-father returns to his home.

Nilakantha notices the disturbance of his daughter, and observes the strange footsteps, and declares that the intruder must die if discovered. 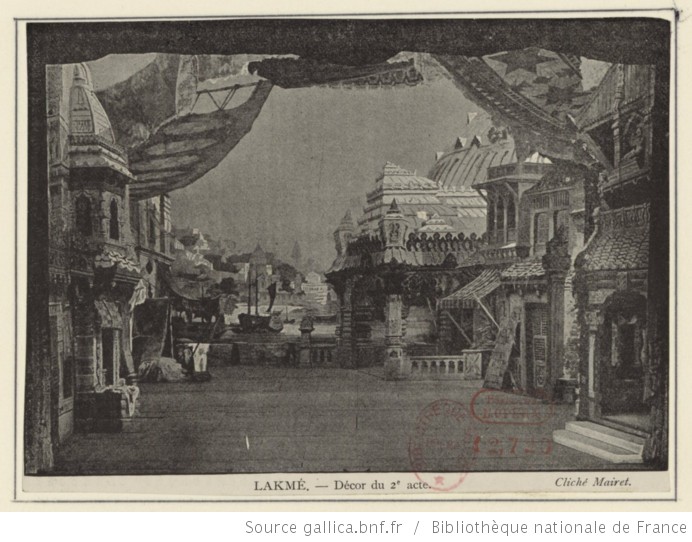 In the second act the scene is changed to the neighboring city, where a grand Brahminic festival and procession take place in honor of the gods and goddesses of India.  Also an Indian bazaar, with its occupations and amusements.

Many English residents are present, among them the party of the first act.  Also the priest and his daughter disguised as penitents.

Nilakantha orders Lakmé to sing, believing that she will be heard by the intruder upon his premises, and by his admiration of her beauty and voice will betray himself to his enemy’s vengeance.

This is the famous “Bell Song”, a coloratura soprano showpiece.  Here is one of the most famous versions:

The plan succeeds.  Gérald is noted by the pleasure he shows at again meeting with Lakmé.  Nilakantha, convinced of his guilt, sends his daughter away and consults with his friends upon the manner in which he proposes to take vengeance upon the destroyer of his peace and the intruder upon the sanctity of his home.  Lakmé, disobeying the commands of her father, remains at hand, and when, shortly afterwards, Gérald is stricken down by the dagger of Nilakantha, she comes forward with her faithful slave, Hadji, and orders him to be carried to a hut concealed in the forest… 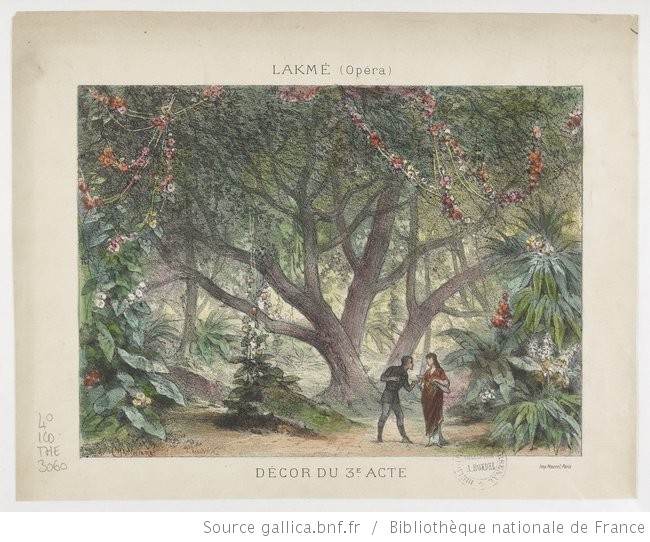 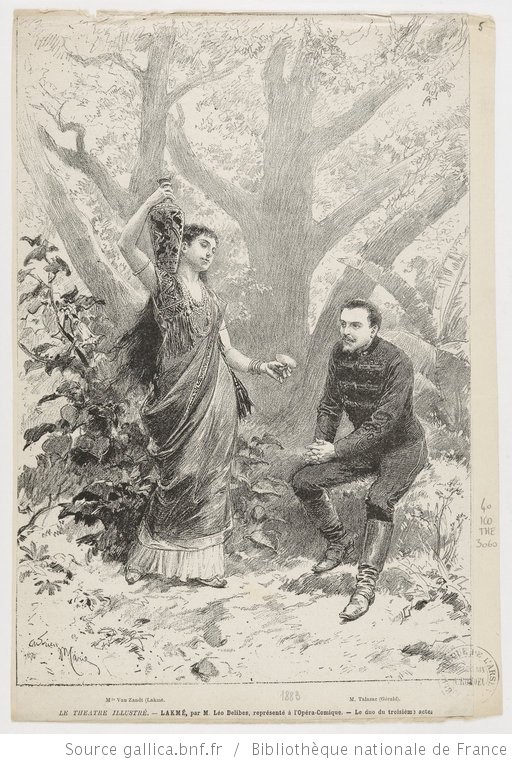 Gérald’s wound found to be not mortal, Lakmé cares for him and restores him to life and strength by the juices of certain plants whose medicinal properties are well known to the Hindus.  There as he recovers, his passion for her increases, and all else, including his former love, seems forgotten.  A chorus of voices is heard passing their retreat, which comes from a pro- cession of young lovers on their way to drink the waters of a sacred fountain, said to have the property of making unions lasting.  Gérald wishes to drink of
this water.  Meanwhile Frédéric has made diligent search for his friend, and at last finds him alone in the hut.  He endeavors to recall him to his duties by telling him that his regiment is ordered off at once to suppress an outbreak among the Hindus.  Gérald promises to be at his post in time, but begs a little delay, that he may once more see and bid adieu to Lakmé.  Upon receiving this promise, Frédéric leaves him at the moment of Lakmé’s return with the sacred water. She is about to present it to him, when she perceives that a change has come over him during her absence.  As she offers the water to Gérald the fifes and drums of his regiment, just leaving for the seat of the rebellion, are heard in the distance. The sound, which recalls him to love and duty, transforms him, and he turns away from the proffered draught.  Lakmé is shocked by the sudden change in him, which she but too well knows how to account for.  In her heart-breaking despair she gathers and eats some flowers of the deadly poisonous datura stramonium, from the effects of which she dies in his arms just as her father and his friends arrive on the scene.

“It is hard to understand how Lakmé got under the wire into the field of Grand Opera,” sniffed Sir Denis Forman in his Good Opera Guide.

“It certainly isn’t grand nor is it an opera, except in the sense that any piece staged with singers and a full orchestra is an opera.  …  So I would advise against spending the price of an opera ticket on Lakmé.  Indeed, if the sale were challenged on the grounds of infringing the Trades Descriptions Act, I would not be surprised.”

Grand opera, you will remember, O Best Beloved, is a serious work in five (sometimes four) acts, sung throughout; often on a historical theme; with plenty of spectacle, impressive orchestral and choral forces, virtuoso singing, and at least one ballet, usually in the third act.  Typical stories include revolutions, popular uprisings, massacres, executions, excommunications, and natural disasters.  The best-known today are probably Rossini’s Guillaume Tell (1829) and Verdi’s Don Carlos (1867).  The best include Meyerbeer’s Huguenots (1836) and Prophète (1849), and Halévy’s Juive (1835).

Opéra comique – the form performed at the theatre of the same name – contains both singing and spoken dialogue.  It is lighter than grand opera, but not necessarily comic.  Some are indeed light-hearted comedies: Boieldieu’s Dame blanche (1825), Auber’s Fra Diavolo (1830), Donizetti’s Fille du regiment (1839).  Some have serious plots, or even deaths, but end happily: Herold’s Zampa (1831) and Pré-aux-clercs (1832), Auber’s Haydée (1847).  And the rare one ends unhappily: Auber’s Manon Lescaut (1856).Nothing, though, to shock the bourgeoisie; this was a family theatre, attended by respectable matrons and daughters.

By the end of the 19th century, the opéra-comique had evolved into something more serious, and often sung-through.  The best-known today is Bizet’s Carmen (1875), which shocked audiences.  The heroine dies – violently – and the characters are smugglers, gypsies, bull-fighters, and other lowlifes.  (Several Massenet works, Debussy’s Pelléas et Mélisande [1902], and Dukas’ Ariane et Barbe-bleue [1907] were also first performed at the Opéra-Comique.)

And Lakmé is very much an opéra comique, in its classical form.

For a start, it was performed at the Opéra-Comique, and was one of the biggest successes since the glory days of Auber – thanks, Arthur Pougin wrote,

It carried on the opéra-comique tradition, rather than rebelling against it like Bizet, with his cry of “No more Dame blanche!”

More, the tune for the market chorus in Act II is lifted straight from the one in Auber’s Muette de Portici.  (Compare here and here.)  The comic quintet that reminded a fuming Forman of Gilbert and Sullivan is also in the tradition of Auber.  (Like, for example, this.)

And it’s in the opéra-comique sub-genre of stories about the British in India [1], and a wider genre of French opera – both grand and comique – set in India and other exotic climes [2]. 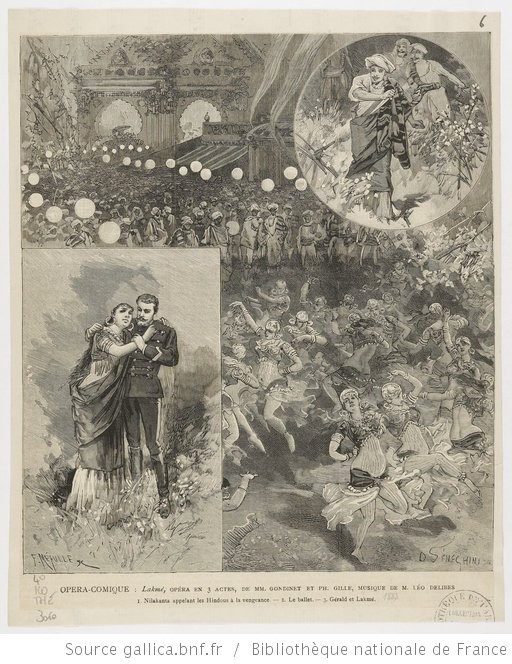 Lakmé brought Delibes – hitherto known as a composer of ballets and Offenbachian opéra-bouffe – success.  He was elected to the Académie des beaux-arts, replacing Victor Massé.  He had made his name.

The opera soon travelled around the world.  Every coloratura soprano wanted to show off her voice in the Bell Song.  (Today, Offenbach’s Doll Song, from Les contes d’Hoffmann, has replaced it in concerts.)

The post-war world has had less time for it.  True, it’s been a vehicle for star sopranos like Joan Sutherland, and British Airways hijacked the Flower Duet.  But the work itself has largely fallen from the repertoire.

It’s towards the tail end of the 200 most performed operas in the world, sandwiched between Ullmann’s Kaiser von Atlantis and Ades’ Powder her face.  If you want to see it in 2018/19, you’ll have to visit Oman or Bulgaria.

I saw it at the Sydney Opera House in 2006, conducted by Richard Bonynge, in a colourful, Hergé-inspired production.

Listening to the 1967 Joan Sutherland recording, it’s easy to see why the opera charmed, and why it fell from the repertoire.  It’s a pretty opera, but not really a dramatic one.

The music is lovely.  There’s the Flower Duet, five minutes of blissful soprano and mezzo canoodling.  There’s the Bell Song, of course.  (I do, though, prefer the sinuous conspiracy chorus that follows.)  There are some great tunes; Gérald’s aria “Fantaisie aux divins mensonges”, or the phrases “Oublier que je t’ai vue” and ” C’est le dieu de la jeunesse” in the Act I love duet.  The orchestral writing throughout is refined, sometimes using « exotic » instruments like tambourines and triangles.

But it’s pretty soft-focused.  It lacks that vulgar little thing called “go”.  With (or for) all its grace and elegance, it’s closer to the world of Auber or Messager, than to Meyerbeer or even Bizet.

The story is, as critics like Bellaigue and Jullien (Musiciens d’aujourd’hui, II) observed, L’Africaine writ small.  Lakmé expires prettily, rather than affectingly.

A hut in the Indian forest