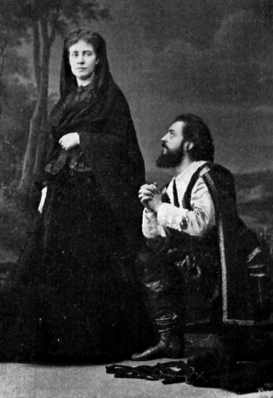 “Neither our amateurs nor our critics recognise my talents,” Dargomyzhsky wrote.

“Their old-fashioned notions cause them to seek for melody which is merely flattering to the ear.  This is not my first thought.  I have no intention of indulging them with music as a plaything.  I want the note to be the direct equivalent of the word.  I want truth and realism.  This they cannot understand.”

While Dargomyzhsky admired A Life for the Tsar (1836) and Ruslan & Lyudmila (1842), he believed that Glinka, “the first to extend the sphere of our Russian music, has only touched one phrase of it – the lyrical”.

Dargomyzhsky wanted to bring out “the dramatic and humorous” sides of the Russian character, first in Rusalka (1856), which Serov called the first truly Russian opera since Glinka’s two masterpieces, then in Kamenny Gost.

The opera is a declamatory Russian take on the Don Juan legend, eschewing operatic conventions – arias and ensembles – for an austere recitative halfway between song and speech.  The text is Pushkin’s play, one note set to a syllable.

Yes, of course Mozart‘s Don Giovanni overshadows it, but this is far more than a mere curiosity.  It’s a meaty little opera, with plenty packed into its short running time.

“Poetry, love, passion, arresting tragedy, humour, subtle psychological sense and imaginative treatment of the supernatural, all these qualities are combined in this opera,” wrote the critic Vladimir Stasov.

In this version, Don Juan is a tenor, melancholic and world-weary in a way Mozart’s bass Don, an expression of pure Id, never is, and an ardent lover when wooing Donna Anna, the Commendatore’s widow.

It was Dargomyzhky’s last work; he was dying of heart problems while he wrote it.

“I am singing my swan song,” he wrote to Mme Karmelina (1868).  “I am writing The Stone Guest.  It is a strange thing: my nervous condition seems to generate one idea after another.  I have scarcely any physical strength…  It is not I who write, but some unknown power of which I am the instrument.  The thought of The Stone Guest occupied my attention five years ago when I was in robust health, but then I shrank from the magnitude of the task.  Now, ill as I am, I have written three-fourths of the opera in two and a half months…  Needless to say the work will not appeal to the many.”

“Thank God that in 1863 Dargomyzhsky recoiled before so colossal an undertaking, since he was not yet prepared for it,” Stasov responded.

“His musical nature was still growing and widening, and he was gradually freeing himself from all stiffness and asperity, from false notions of form, and from the Italian and French influences which sometimes predominate in the works of his early and middle periods.  In each new composition Dargomyzhsky takes a step forward, but in 1866 his preparations were complete.  A great musician was ready to undertake a great work.  Here was a man who had cast off all musical wrong thinking, whose mind was as developed as his talent, and who found such inward force and greatness of character as inspired him to write this work while he lay in bed, subject to the terrible assaults of a mortal malady.”

Dargomyzhsky died in January 1869, leaving the work unfinished.  He appointed César Cui to finish the first scene, and Rimsky-Korsakov to orchestrate the piece.

Unsurprisingly, the instrumental writing is excellent.  Notable are the sword fight (cymbals = clashing swords); and the maestoso pages at the end of Act I where Don Juan takes Laura into the bedchamber, with a phrase strikingly similar to Scheherazade.

The scene where Don Juan invites the statue to dinner is more powerful than Mozart’s semi-comic treatment (“Colla marmorea testa, Ei fa così, così”).  Its heavy chords and harsh brass are Mussorgskyan.  In the final scene, Rimsky-Korsakov unleashes the full force of the 19th century orchestra, complete with drums and whooping brass.  It looks forward to Strauss.

Despite its emphasis on poetry and drama, and disdain for operatic convention, Kamenny Gost is not a Wagnerian work.  Dargomyzhsky was familiar with Wagner’s theories, and his early music dramas; he found them intriguing, but lacking.

“I have not returned your score of Tannhäuser,” he wrote to Serov in 1856, “because I have not yet had time to go through the whole work.  You are right; in the scenic disposition there is much poetry; in the music, too, he shows us a new and practical path; but in his unnatural melodies and spiciness, although at times his harmonies are very interesting, there is a sense of effort – will und kann nicht!  Truth – above all truth – but we may demand good taste as well.”

Dargomyzhsky, Rosa Newmarch (The Russian Opera, 1914) argues, was “no conscious or deliberate imitator of Wagner”, and would have developed his music drama even if Wagner never existed.

Rather, the elegance and naturalism of the vocal writing anticipates Massenet, who also moulded music to text.  Laura’s scene on the balcony – lovely, but not quite an aria – recalls scenes from such late Massenet operas as Roma and Cléopâtre.  Laura has the only two romances – one to a text by Dargomyzhsky, to a pizzicato guitar; the other setting a Pushkin poem.  Both are fine.

After a press campaign to raise money, the work was performed at the Mariinsky in 1872, with some of Russia’s finest singers, and conducted by Nápravnik.

Its reception was mixed.    “It is one of the greatest creations in the world,” Stasov raved.  Dargomyzhsky’s disciples, the Mighty Handful who sought to create a distinctively Russian music, admired it.

Tchaikovsky, on the other hand, didn’t like it.  This “opera without music” is “the lamentable fruit of a dry, purely rational process of invention”.

Rimsky-Korsakov, unsatisfied with his instrumentation, reorchestrated it in 1898.  This version, finished in 1903 and performed at the Bolshoi in 1907, is now the standard version.

Today, while not a popular work, Kamenny Gost is a respected one.

“There is not the development of Russian musical culture without The Stone Guest,” Viktor Korchikov wrote (2007).

“Three operas – A Life for the Tsar, Ruslan and Lyudmila, and The Stone Guest – created Mussorgsky, Rimsky-Korsakov, and Borodin.  A Life for the Tsar is an opera, where the main character is the people, Ruslan is the mythical, deeply Russian intrigue, and in The Guest, the drama dominates over the softness of the beauty of sound.”

Dargomyzhsky’s influence is particularly clear on the flexible, naturalistic recitative of Mussorgsky, the genius pupil of his “great teacher of musical truth”.

In the Precincts of a Monastery

The Mausoleum of the Commander

A Room in Donna Anna’s House