Libretto: Maurice Léna, after a tale by Anatole France, inspired by a mediaeval legend 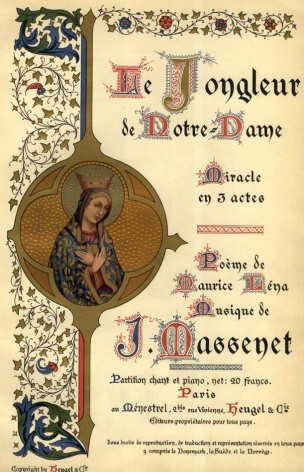 Massenet, ‘le musicien de la femme et de l’amour’, as Schneider called him, composed an opera without either — except, the composer said, the most sublime of all women: the Virgin.

Le Jongleur de Notre-Dame is a mediaeval ‘miracle’, taken from the Miracles de Notre-Dame collected by Gautier de Coincy in the 13th century, and based, like Thaïs, on an Anatole France story.

The wandering minstrel of the title is the simple Jean, devoted to Mary.

After he sings a blasphemous Alléluia du vin to entertain a crowd, the monk Boniface persuades him to join the monastery.  There, everyone glorifies God in their own way; some sing, one paints, another sculpts.  What shall Jean do?  He juggles before the statue of the Virgin, who comes to life and blesses him.  Jean, crowned with an aureole, dies; and the monks exclaim that he is a saint.

The plot is simple, naïve even, but the music is, as Félicien Grétry, Arthur Pougin and Louis Schneider recognised, that of a master.

Indeed, that simplicity is the point; “Heureux les simples, car ils verront Dieu,” sings the Prior as the curtain falls.

The most famous aria, Boniface’s Légende de la Sauge, taken from a mediaeval song-cycle, tells how the simple sage opened its leaves to shelter Mary and the infant Jesus, while the haughty rose refused.

Jean may not be a great painter or sculptor, but his juggling and minstrelsy are worthy in the Virgin’s eyes.

Where, though, would an opera without women or romance be performed?  The Parisian
theatres were uninterested.  To Massenet’s rescue came Raoul Gunsbourg, director of the
Théâtre de Monte-Carlo, acting on behalf of Prince Albert I of Monaco.

Starting with Jongleur, seven of Massenet’s last ten operas would be premiered in Monte-Carlo.

The Jongleur, first performed in Monte-Carlo on 18 February 1902, was a success.

At the end of the last act, the Prince awarded Massenet the Grand-Croix de l’Ordre de Saint-Charles, while the audience cried ‘Vive le prince! Vive Massenet!’

‘The true value of the score,’ wrote Schneider, ‘is that it comments with astonishing fidelity, with a rare choice of musical expression, on all the events of this pretty legend.  Le Jongleur is a fabliau sung in music, — in a music alternately moving, witty, ingenious, excitable, serene, always of an astonishing candour.  Massenet’s music in this work has half-colours; it smacks of mystery; deliciously veiled, it sounds like dim light shining quietly through stained glass.’

The work opened in Paris in May 1904, and received its hundredth performance at the Paris Opéra-Comique in 1908.  The work was performed in Milan in 1905, London in 1906, and New York in 1908 — where the soprano Mary Garden sang the role of Jean, much to Massenet’s horror.

“I was appalled, I confess it, to see this monk discard his robes, after the performance, and put on an elegant gown from the Rue de la Paix.  Nevertheless, before the artist’s triumph, I bow and applaud.”