Mascagni’s first opera, which catapulted him to stardom.  He entered the work in a competition sponsored by the music publisher Sonzogno, won first prize, and with it fame and renown.  These days, it’s usually performed as a double bill with Leoncavallo’s Pagliacci, as “Cav & Pag”.

SETTING: Easter Day in a Sicilian village in the 19th century.

The village folk are celebrating, but not everyone’s happy.   Turiddu, a young soldier, is involved with two women – one of them married.  While he was away fighting, his girlfriend Lola married the carter Alfio.  Turiddu then picked up with Santuzza, seduced her, and abandoned her.  He’s now carrying on with Lola behind her husband’s back.  The jealous Santuzza tells Alfio that Turiddu is sleeping with his wife.

Alfio challenges Turiddu to a duel; and Turiddu is killed. 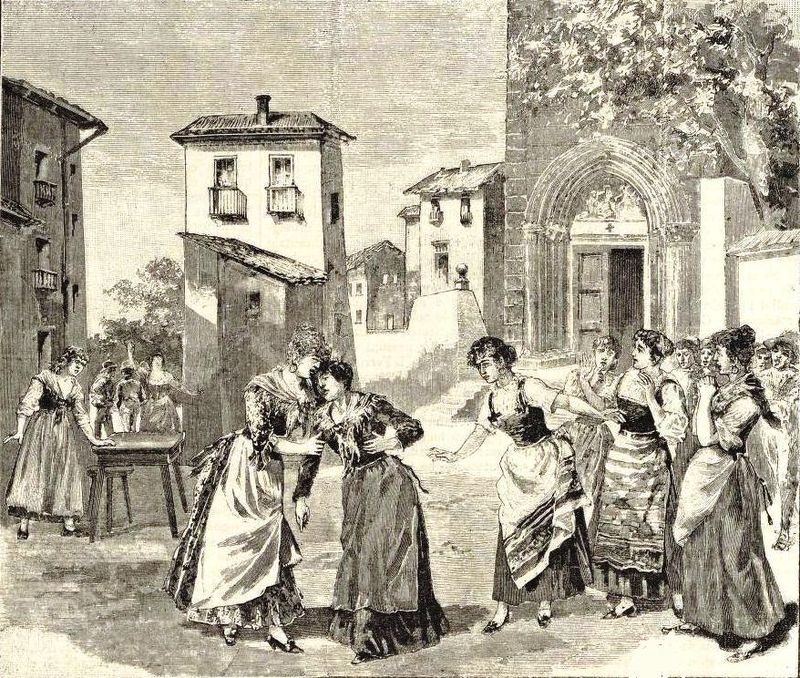 Cav is an intense drama with passions running high in a Sicilian village; with two of opera’s most famous numbers; and all in little over an hour.  It’s thought of as a verismo opera – a naturalistic (insofar as opera ever is naturalistic) story, dealing with the lives of everyday people, rather than great historical figures – but it’s also in the line of traditional opera, with peasants’ choruses, large scale religious ensembles, baritone character arias, and drinking songs.

The Easter setting provides local color, but it’s also an ironic commentary on the drama.  Turiddu, like Christ, dies at Easter, knowing that he will go to his death – but to atone for his own sins, rather than the world’s.  His mother is, like the Madonna, a type of the Mater Dolorosa (Sorrowful Mother).  Santuzza explicitly compares herself to Mary Magdalen, the repentant prostitute, but believes she is damned.

The public square of a village in Sicily, on Easter Day.