Lyric drama in 3 acts and 5 scenes

Turandot was Puccini’s last opera: a dream-like work set in Ancient China about a frigid princess who beheads her suitors, a nameless prince, a masochistic slave-girl, and a deadly game of riddles.

In front of the imperial palace – Sunset

A mandarin reads a proclamation to the crowd: Turandot the pure will be the wife of the prince who solves her three riddles; if he fails, he loses his head. The latest luckless suitor is the Prince of Persia, who will die at moonrise.

The Unknown Prince finds his father, the deposed Tartar king Timur, and the slave-girl Liù, who is looking after him because the Prince once smiled at her.

The executioner Pu-Tin-Pao enters, accompanied by his assistants. The people are worked up to a frenzy of bloodlust. The moon slowly rises, like a severed head.

The Prince of Persia is led to the scaffold.  Turandot appears on a balcony, lit by a moonbeam; she gestures for him to die.  The Unknown Prince is struck by her beauty, and falls in love with her.  He rushes towards the gong to challenge Turandot, but is stopped by Ping, Pang, and Pong, the Emperor’s three ministers.  Their warnings are useless.  Even Liù’s plea doesn’t sway him.

The Prince strikes the gong – and the ministers run away, snickering.

A pavilion in the imperial palace – Before sunrise

The three ministers prepare for the riddle ceremony.  They are weary of the slaughter; Turandot has already killed 26 suitors.  If only the Princess would fall in love!  In the meantime, they’ll enjoy the umpteenth torture.

The courtyard of the palace – Sunrise

The crowd and courtiers assemble to watch the latest suitor try his luck.  Mandarins and sages parade by.

The Emperor Altoum, old and venerable, urges the Prince to reconsider, but the challenger is adamant.

Turandot appears, beautiful and cold.  She tells the Prince that thousands of years ago, her ancestress, the Princess Lo-u-Ling, was ravished by a foreign stranger – like the one who now challenges Turandot.  Turandot will avenge the insult.  The riddles are three – but death is one!

The Unknown Prince answers her riddles (Hope, Blood, Turandot) – and challenges Turandot in his turn: Discover his name before dawn, and he will die.

Turandot has ordered the populace of Peking to discover the stranger’s name before dawn, under pain of death; no one must sleep.  The Prince, though, will keep his name a secret until dawn – when he will win her love.

The three ministers offer him women, riches, and glory, but the Prince wants only Turandot.  Guards bring on Timur and Liù; they try to tear the name from Liù, but she will not yield.  Love, she tells Turandot, gives her strength to resist.  When Turandot summons the executioner Pu-Tin-Pao, Liù stabs herself.

Turandot and the Unknown Prince are left alone onstage.  The Prince kisses Turandot passionately.  “Carried away,” the libretto reads, “Turandot has no more resistance, no more strength, no more will power. This unbelievable contact has transfigured her.”  The Prince tells her his name: he is Calaf, son of Timur.

The courtyard of the palace – Dawn 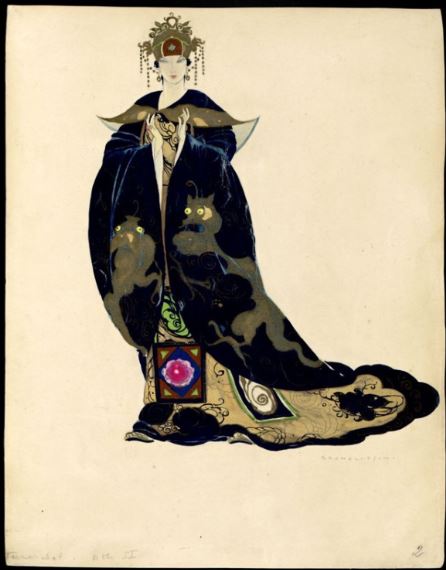 Turandot is an enigma wrapped inside a contest of riddles.  It’s easily my favourite Puccini, but it’s also one of opera’s great “What-if?”s: a masterpiece unfinished at the composer’s death.

This is spectacular grand opera in a modernist idiom, Puccini keeping up with modernist composers Stravinsky and Schönberg’s novel harmonies and dissonances.

The score is Puccini’s richest, with exotic orchestration (gongs and xylophones), authentic Chinese melodies (the national anthem and the jasmine flower song “Mo Li Hua”), and a masterly use of choruses and ensembles on a scale beyond his previous operas.

The first two-and-a-half acts are magnificent: crowd scenes, ethereal moonlit choruses, funeral processions, ironic commedia dell’arte, death-defying challenges, and the mighty Riddle Scene, where a prince wagers his head to win life and love in a stratospheric battle on the high C’s.  It also boasts “Nessun dorma”, possibly the most famous opera aria in the world, and the moving death of Liù.

But the ending doesn’t quite come off.

Turandot is the most unsympathetic of all Puccini’s heroines: a multiple murderess, cousin to Strauss’s Salome, another ghastly princess with links to the moon, penchant for decapitation, and sexual obsession.  “The passion of Turandot … for so long has been suffocated beneath the ashes of her immense pride,” Puccini wrote to his librettists.

She is, as Burton D. Fisher (Puccini’s Turandot Study Guide and Libretto, 2017) recognises, an archetype: the male-hating woman who fears love, but who “finally capitulates [to Calàf] with fervid passion, her transformation a powerful statement about humanity’s yearning and desire for the fulfilment of love”.

The catalyst is the suicide of Liù, stabbing herself rather than reveal the Prince’s name.  The act of self-sacrifice inspired by love thaws the Princess’s icy heart.

“It must be a great duet,” Puccini wrote.  “These two almost superhuman beings must descend through love to the level of mankind, and this love must at the end take possession of the whole stage in a great orchestral peroration.”

What Puccini had in mind, apparently, was something on the lines of the Liebesnacht or the Frau ohne Schatten or Fidelio finales – but he died before he could write it.

He may have doubted his ability to tackle such a metaphysical theme, remote from the simple, down-to-earth, human tragedies of Mimì dying in her garret, or Ciocio-san committing seppuku after her lover abandoned her.

He put off writing the duet, demanded the text be revised three times, and, contrary to his normal practice, orchestrated the rest of the opera before writing the ending.  When he died after an operation for throat cancer in Brussels in late 1924, he had only written the third act up to the death of the slave-girl Liù.

All that existed of the crucial duet was 36 pages of sketches.

His family and publishers Ricordi chose Franco Alfano to complete the opera.

At the première, however, conductor Arturo Toscanini famously laid down his baton, ending the performance where Puccini had his composition.

Because the opera is unfinished, critics – among them George Marek (“The Riddle of Turandot“, essay in 1960 Leinsdorf recording) and Charles Osborne (The Complete Operas of Puccini, 1981)  – find the resolution unconvincing, lacking the musical and dramatic climax of the work.  Piotr Kaminski compares Calàf and Turandot’s march to wedded bliss over Liu’s corpse to the Pinkertons living happily ever after Butterfly’s death.

Watch: Franco Zeffirelli’s wonderful Met production, in any of its versions.  The 1987 original starred Eva Marton, Plácido Domingo, and Leona Mitchell, conducted by James Levine.  It has been broadcast twice as a Met in HD film: with Maria Guleghina, Marcello Giordani, and Marina Poplavskaya, conducted by Andris Nelsons (2009); and with Nina Stemme, Marco Berti, and Anita Hartig, conducted by Paolo Carignani (2016).

This is the sort of production where the scenery gets a round of applause – and with good reason!  Zeffirelli has recreated legendary China onstage – no beehives or robots for him!  Beautiful costumes; pagodas rising out of the floor; and even a dragon dance!

In front of the imperial palace

A pavilion in the imperial palace. Before sunrise

The courtyard of the palace. Sunrise

The courtyard of the palace. Dawn