Cilea slays it with flowers in this tale of love and rivalry in 18th century Paris. 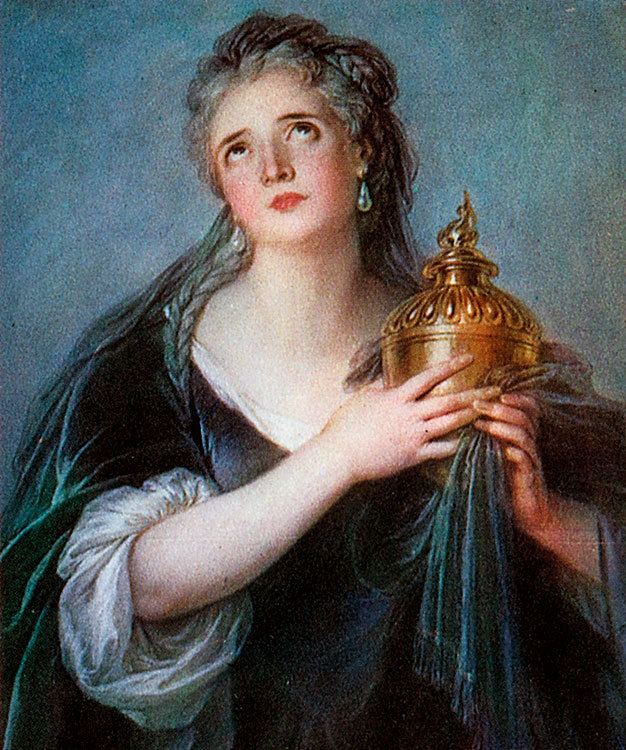 Adrienne Lecouvreur (1692-1730) was the great French actress of her day. She introduced naturalism to the French stage, at a time when it suffocated under a stilted style.  She revolutionised theatre, critic Gustave Planche wrote.

“At the time of her débuts, tragic and even declamation were hardly more than a sort of cantilena. To speak rather than sing, replace overemphasis with familiarity, a loud voice with a simple and natural tone, and to mould the voice to the emotion seemed an outrage…” (Revue des deux mondes, tome 2, 1849)

In other words, Mlle Duclos and her school were a pack of hams.  Adrienne, though, had other ideas.  After performing the most difficult roles of Corneille, Racine, and Molière in provincial theatres for twelve years, she made her début at the Comédie-Française in 1717.

“Adrienne didn’t hesitate for a moment. As she had the good fortune not to have been taught by an acclaimed master, as she had been nourished mainly by reading and thinking, as she had freely compared the ideal of Monime, Roxane, Pauline, and Cornélie to the strange personifications which the crowd admired, as she had consulted her conscience, questioned her heart, without taking into account the consecrated maxims, the very truth, the simple and austere truth, was to her plain: to be natural, to translate faithfully the thought of the poet, Adrienne had only to listen to herself, and her heart filled with memories.”

She loved, among others, the heroic but fickle pleasure-seeking Maurice de Saxe, whose passion was war, and who never saw love other than as a passing amusement.

She died before the age of 40, after 12 years of dazzling successes. Rumour (ill-founded) had it that she was poisoned by a rival in love, Françoise de Lorraine, duchess of Bouillon.

From this, Eugène Scribe, the scriptwriter king of the mid-19th century, and Ernest Legouvé concocted a historically inaccurate drama of rivalry and murder in the Comédie-Française and the palaces of the French aristocracy.

The jealous Mme de Bouillon kills Adrienne by sending her a poisoned bouquet of flowers, apparently from her estranged lover, Maurice de Saxe.  (John Dickson Carr used a similar device in one of his detective stories, where a nitrobenzene-soaked bouquet causes an ageing actress to fall to her doom.)

The play, premiered on 14 April 1849, was a success.  Critics like Planche sniffed; it was well-constructed, but concentrated on external action at the expense of inner feeling.

The public thought differently.  The piece, created for the great French tragédienne Rachel, became a hit, and was regularly performed throughout Europe, often as a vehicle for star actresses like Sarah Bernhardt.

Cilea believed the opera would make a worthy sequel to his successful Arlesiana (1897).

“Among the many works I read in that period,” he wrote, “the one by Scribe and Legouvé impressed me the most.  The variety of action offering me new and elegant situations, the fusion of play and drama in the eighteenth-century setting (which I know well), and the passionate love of the protagonist touched my heart and sparked my fantasy.” 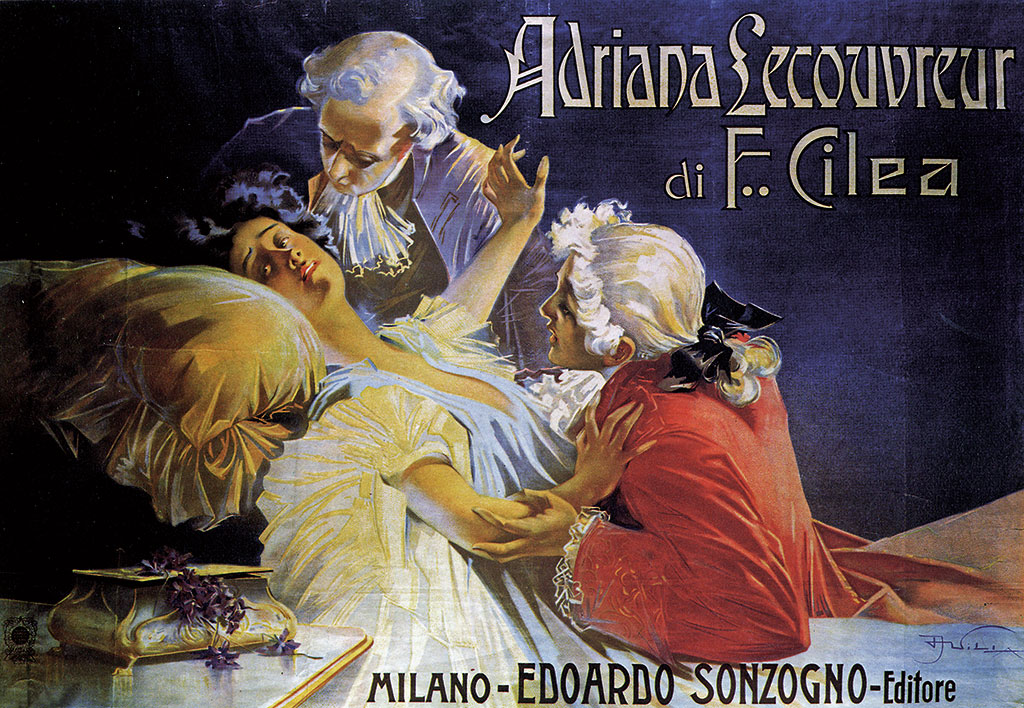 The première in Milan was a success; it starred Angelica Pandolfini (the first Mimì in Puccini’s Bohème) and Enrico Caruso.

The work soon reached Europe and the US, but, after 1910, was mainly resurrected as a vehicle for ageing soprani who wanted to show they could act as well as sing.  (Adriana enters speaking her lines from Racine, and the climax of the third act is a recitation of Phèdre.)

Cilea’s score, like so many verismo operas, is through-composed; aria and recitative blend. Most of the vocal lines are arioso, halfway between aria and recitative, supported by (often attractive) instrumental phrases, occasionally blossoming into lyricism (e.g. the Adriana / Maurizio duet in Act I, or Maurizio’s plea to the Princess in Act II), or pausing for a set-piece aria.

Note, though, that “occasionally”.  While the music is apposite, and often elegant, it can become tiresome, even lugubrious.  The ear wants rhythm and melody!  A through-composed score rarely offers the musical pleasures of a closed number (aria, ensemble).

The plot is too complex to offer a synopsis.  Let us simply say that it involves the rivalry of the actress Adriana Lecouvreur and the Principessa di Bouillon for the love of Maurizio, conte di Sassonia, pretender to the throne of Poland (disguised, of course, as a commoner, like many of Scribe’s heroes), and that it ends with the actress expiring from respiring poisoned flowers, à la Sélika.  That way, we don’t have to talk about keys (for doors, not musical ones), letters, or diamonds.

The opening act backstage at the Comédie-Française is brisk and naturalistic.  Adriana enters to a phrase that is almost Impressionistic in its Debussyan delicacy.  In her aria “Io son l’umile ancella”, she explains that she is the humble handmaid of the creative genius.

By the end of the act, Maurizio has made a clandestine arrangement through actress Mlle Duclos to meet the Principessa di Bouillon at the Prince’s villa by the Seine.  The Prince, who is Duclos’s lover, thinks Duclos is meeting Maurizio, and plans to surprise them.  Adriana will also go there.

Act II, set at the Prince’s villa by the Seine, is much the strongest.  It opens with the Princess’s anguished “Acerba voluttà, dolce tortura”.  As she waits for Maurizio to meet her at her husband’s love-nest, she is torn between doubt and desire.

It offers a series of dramatic confrontations (Maurizio/Principessa, Maurizio/Adriana), culminating in a row between the two rivals in love Adriana and the Princess, each determined to discover the other’s identity.  This is the highpoint of the opera; from here, it’s downhill.

The third act is pastiche 18th century, and suffers a fatal attack of ballet.  (Leave it to the French!)  Adriana and the Principessa recognise each other, quarrel, and Adriana publicly insults her with a pointed poetry performance.

Adriana receives the poisoned flowers, which she thinks are from her ex-lover Maurizio.  Poor flowers! she thinks in an exquisitely sad aria.

Flowers and the opera have both lost their bloom well before the end of the act, which is one of those slow, protracted, undramatic dying acts beloved of opera composers.  Adriana’s final moments, though, are luminously beautiful, as she imagines her soul flying like a white weary dove to the light of love.

Backstage at the Comédie-Française

A villa by the Seine

A room in Adriana’s house