Giovanni Pacini may hold the record as the 19th century’s most prolific opera composer.  His contemporaries reckoned he’d written a hundred works; closer attention whittled this down to a more manageable 74.

Nearly all of them have been forgotten.

“This abandonment,” Arthur Pougin (Le Ménestrel, 28 October 1866) wrote, “is the just punishment that awaits a man of talent and inspiration too careless of his renown, preferring quantity to quality, and infuriatingly scattering through a hundred mediocre or feeble scores, that which could have made twenty excellent ones.”

In the first half of his career, he imitated Rossini; in the second half, he seems to have imitated everyone else.

Pacini admitted the influence in his Memorie artistiche:

Rossini was always a source of indescribable admiration; but I was perfectly aware of being merely a slavish imitator by following him.

As many my contemporaries were in those days, all followed the same school, the same fashion, and were in consequence imitators, just like me, of the Great Star. – But, good God!  What was one to do if there was no other way of sustaining oneself?  Therefore, if I was a follower of the supreme Pesarese, the others were my equals; they may have been more fortunate in finding melodies, more accurate in their instrumentation, more educated; but the realization and the structure of the pieces was similar to mine.”

For Joseph Caccia (La comédie, 15 December 1867), Pacini’s imitation was a happy one, thanks to the richness of his imagination.  “His melodies emerged easily and spontaneously, and many remained popular until his death.”  Pougin called Pacini “a medium-sized star, now a nebula – but he had the honour of being part of the Rossinian constellation”.  And Pierre Scudo (“Donizetti et l’école italienne depuis Rossini”, Revue des Deux Mondes, 1848) dismisses Pacini as nothing more than a fluent imitator.

Pacini’s operas were popular throughout Italy – some, like Gli arabi nelle Gallie (1827), enormously so – but only a handful were performed elsewhere in Europe.  To his admirers, he was maestro delle cabalette, the supreme master of the cabaletta.  “Nobody better knew voices, nor used them with more skill, nor arranged them with more art,” wrote A. de Rovray (Le Nouvelliste, 25 January 1855).

Pacini himself, though, was well aware of the shortcomings of his music.  His system, he wrote, was one of “melodic simplicity, variability in the cabalettas, and unsophisticated instrumentation”.

My instrumentation has never been sufficiently accurate, and although it was lively and brilliant many times, it did not arise as a result of reflection, but rather by that natural taste given to me by God.  I often neglected the quartet of stringed instruments, or took much care of the effects I could have achieved from the various other groups of instruments.  I always have had an eye for the vocal part indeed, more than anything else, and above all, I tried to examine the vocal possibilities of the individual singers to whom i entrusted my compositions, with appropriate music adapted to their organs, in order to increase the probability of success.

Pacini made a name as a teenager and young man with one-act farse and the semiseria Il barone di Dolsheim (1818).  After the success of L’ultimo giorno di Pompei (1825), the impresario Barbaia engaged Pacini as music director and composer for the royal and imperial theatres of Naples, Milan, and Venice.  Major works from this period include Alessandro nelle Indie (1824), and Niobe (1826).

Seeing his star pale before the brilliance of Donizetti and Bellini, Pacini retired in 1831.  “I began to realize that I had to withdraw from the arena. – Bellini, the divine Bellini, and Donizetti had surpassed me.”

He returned to the stage in 1839, with Furio Camillo.  Saffo, supposedly his masterpiece, followed in 1840.

“From this period until his death,” Caccia writes, “we see in all Pacini’s operas the reflection and imitation not just of Rossini, but of all those who appeared on the musical horizon.  In this second period, we find echoes of Bellini, Donizetti, Mercadante, and even Verdi.”  Il saltimbanco (1858), for instance, is apparently only an exaggeration of Verdi’s first manner.  (“God!” the young man cried in a tone of unmistakable disgust. Early Verdi is bad enough, without having to make more of the stuff.)

Alexander Weatherson, however, writes that Pacini’s later works are “pseudo-historic, immensely emotional operas sung by the greatest artists of the day…  Their invention and variety are astonishing, and made an indelible impact.”

Dwight’s Journal of Music (2 July 1858) raved about Lorenzino de’Medici (1845), “a superb opera by Pacini, and one that for a time made me stagger in my Verdi faith. It is so fresh, so original, and combines musical science so well with ear-haunting and simple melody that it appears to me astonishing that it has not obtained a reputation out of Italy.”

La Riforma wrote of Niccolò de’Lapi (1873): “Meyerbeer and Wagner and the Verdi of Forza del Destino, of Don Carlos, of Aida, have found a powerful rival, a true titan, in the immense and stupendous finale of the second act.”

So there must be something in Pacini.

Not in L’ultimo giorno di Pompei, though. 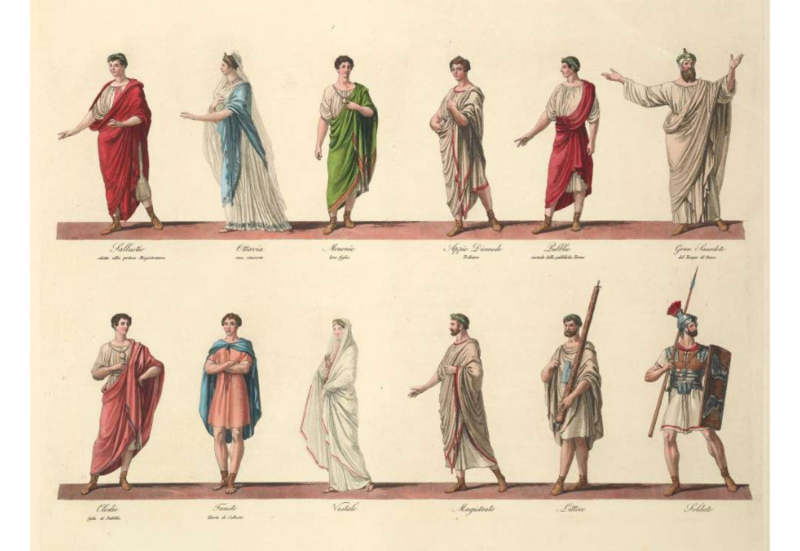 PLOT: The tribune Appio Diomede is in love with Ottavia, wife of Sallustio, who has just been elected magistrate.

Act I: When Ottavia rejects his advances, the jealous Appio schemes to frame her for adultery, a charge carrying the death sentence.  As magistrate, Sallustio must judge the case – and punish her, if necessary.

Act II: Sallustio finds his wife guilty, and condemns her to be buried alive.  Appio and his henchmen confess, however, just in time to save Ottavia.  She and her family escape, while the villains are executed, and Vesuvius erupts, raining down fiery death on everybody else.

The lively introduzione (“Viva Sallustio!”) is in the mould of Rossini; it calls for flexible, agile voices that fire volleys and cascades of coloratura, and ends in a series of patented crescendi.

After Sallustio and company have gone to the baths, his wife Ottavia expresses her happiness and love for her husband in a conventional cavatina (“Alfin goder m’è dato”).

Appio tries to seduce the virtuous Ottavia, in a three-part aria (“Da te, l’estrema volta”).  She remains adamant.  This is one of the better pieces in the score.  The andante section, where he throws himself at her feet, is beautiful, and it ends in an exciting, heated allegro.

Gates of Pompei at Porta Nolana

Appio and Pubblio scheme, in recitative.

Forum of Pompei decorated for the celebrations

Sallustio, in a cheerful, Rossinian aria (“Se i numi fausti”), asks the gods to always bestow happiness on Pompeii.

Portico of the great theatre

Appio and Pubblio plot once again in a short, dry, and musically perfunctory duettino (“Io la vedrò fra i palpiti”).

Rossini’s Semiramide seems to be the inspiration for the finale’s powerful concertato (“Qual denso velo”).  The stretta is effective.

The chorus of people, patricians, and senators urge Sallustio in a nondescript chorus (“Sei nell’augusto tempio”) to ignore his private feelings, but uphold duty and honour.

Ottavia tries to convince her husband of her innocence; the duet (“Squarciami il core, o barbaro!”) has a rather nice andante.

In a massive concertato (“Dei! qual fragore insolito!”), Sallustio condemns his wife to be buried alive – and Vesuvius starts to rumble.

The garden of Appio’s house, near the city walls 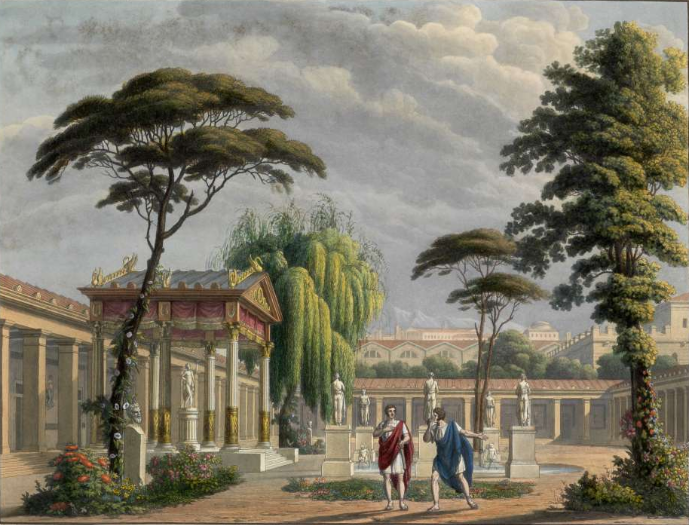 The finale obviously caught Pacini’s imagination, and he’s more inspired than anywhere else in the score.  The scene opens with a mournful chorus of maids and people (“Oh sventuarata Ottavia!”).  The prima donna’s big scene (“Su questa man concedi”) looks forward to Bellini and Donizetti.

I will set all modesty aside by simply exposing the truth.  The whole of Naples got enthusiastic by this work, and gave me a laurel wreath that was quite difficult to obtain from that musical population.  I received a congratulatory letter by order of H.M. King Francesco I of Bourbon, and I was appointed corresponding member of the Royal Academy of Fine Arts.  Barbaia, upon this truly sensational success (after which he was appointed in Milan and other capitals as well), offered me a contract for nine years as director of his theatres, at stipulations and conditions similar to those the great Pesarese [Rossini] had obtained. – I accepted.

It was his 27th opera, and belongs to his Rossinian period, with a starring role for the great tenor Giovanni David.

“I put more coherence in the colour of the composition,” Pacini wrote, “but, I confess, in some parts of the score the Rossinian style is noticeable.”

Much of the music is conventional, but not inspired enough to be imitation Rossini.  It sounds, really, like Rossini crossed with Spontini: pompous ceremonies and processions in Ancient Rome.

The opera was apparently a triumph of special effects, with molten lava flowing towards a terrified audience.  The idea for the opera came from the Teatro an Carlo’s scenographer Antonio Niccolini, whose production involved real explosives and complex lighting

Alessandro Sanquirico’s designs for the 1827 La Scala production influenced Paris Opéra designer Cicéri’s erupting volcano in Auber’s Muette de Portici.  Sanquirico’s designs are imposing, and a clue to the sheer scale of the work.  One three-minute scene involves a new set, never used again.  (Barbaia was obviously making a motza from his casino.)

For all its stage effects, erupting volcano, and fiery deaths, the work leaves me cold.

Gates of Pompei at Porta Nolana

Forum of Pompei decorated for the celebrations

Portico of the great theatre

The garden of Appio’s house, near the city walls