Schillings’ opera is an intense shocker inspired by Leonardo da Vinci’s famous painting, and which plays with ideas of reincarnation and the eternal mysteries of Woman. It was a success in its day, performed throughout Germany, Austria, and Czechoslovakia from its première in 1916 until WWII, and staged at the New York Met in 1923.

It may have lost much of its popularity, but it’s a powerful work that deserves more attention. (It has been commercially recorded three times, and revived in the German-speaking world in 1953, 1983, 1994, and 1996.)

The historical Mona Lisa, Lisa del Giocondo (1479–1542), was the wife of Francesco del Giocondo, a prosperous Florentine cloth and silk merchant. The marriage appears to have been successful; Francesco, in his will, wrote of “the affection and love of the testator towards Mona Lisa, his beloved wife … [and] the fact that Lisa has always acted with a noble spirit and as a faithful wife…” 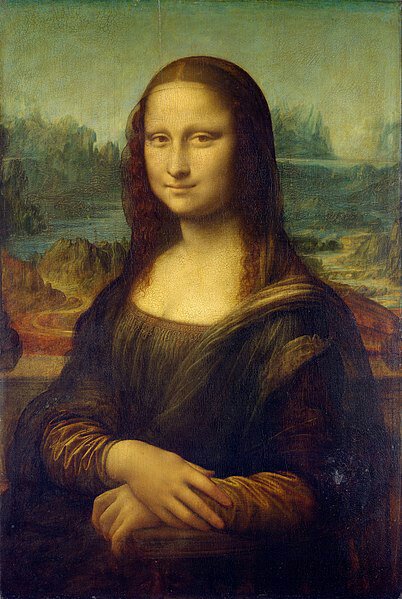 There’s not enough for an opera, so Schillings’ Mona Lisa is, like so many operatic heroines, unhappily married. Her father made her marry Francesco, here a jewel merchant, rather than the man she loved, young Giovanni de’ Salviati, in the Pope’s service. Mona Lisa and Giovanni meet again, Francesco discovers that they love each other, and all ends tragically.

This is a stock situation; we’ve seen it, for instance, in Bellini’s Pirata. What makes it theatrically effective is the gruesome double murder.

Francesco keeps his treasures in a secret chamber, a box within a box, hidden behind a tapestry. Giovanni hides inside the box – and Francesco locks him inside to suffocate, while he makes love to his wife outside, both knowing that Giovanni is dying.  Mona Lisa collapses, while her husband triumphs.

The second act opens with Mona Lisa coming to her senses.  At first, she believes that the harrowing events of the night before were only a dream – but soon realises they were all too real.

In the second act, Mona Lisa has her revenge; she tricks Francesco into entering the treasure chamber, then shuts him inside to die.

The plot is as gripping as the famous second act of Puccini’s Tosca, which it resembles: baritone tortures soprano’s lover to make her yield, soprano kills baritone.

Two scenes set in the present day frame the story. An old man and his young wife visit the house of the Certosa Monks, formerly Francesco’s house. A lay brother tells them the story of the murders. We’re in no doubt that these people from the early twentieth century are Francesco, Mona Lisa, and Giovanni reborn; they’re played by the same singers, the young wife has Mona Lisa’s fondness for flowers, the husband has Francesco’s obsession with pearls, and the lay brother recognizes the wife as Mona Lisa at the end. Will the same drama play out, three and a half centuries later?

The framing story adds an eerie, metaphysical element to the drama, typical of the theatrical sophistication of the early twentieth century.

The score is post-Wagnerian, halfway between Strauss and Puccini. It’s through composed, without any “big tunes”, but the music is always appropriate to the action.  It reaches lyrical heights in Mona Lisa and Giovanni’s love duet; the two murders are dramatic, the first act ending on a grim curtain; and Mona Lisa’s two big arias are intense.

Mona Lisa herself is one of those operatic beauties who fascinates yet disturbs mere men. She seems to embody the eternal female, enigmatic and unfathomable. The lay brother, about to tell the story, finds women baffling:

Woman is a riddle past all solving.

Within her soul, unknown to her, there sleep

A thousand possibilities… And she is soft as wax,

She bends to every hand,

And is Fate’s plaything…

She shrinks back from an unkind word,

And bears unheard-of torture with a smile…

She cannot bear to break a flower,

And then, again, grows drunk with cruelty

Which a man’s mind would scarce know to conceive.

The heart of woman in its depths conceals

The lust of Eve for the forbidden fruit;

The sinful, wanton longing of the Magdalen,

And all the wondrous power of her remorse;

The thirst for blood and vengeance of the Baptist’s murd’ress,

The Virgin’s purity, her gentleness and mercy!

According as the dice of life may roll

So does that enigmatic creature, woman, change!

That look, you say? Mysteriously delusive…

And yonder mouth, whose smile seems one so yielding.

My wife, who never smiles and never thrills

With consciousness of power, entrancingly!

And I must solve the mystery of her smile!

Both men see her as incarnations of the sensuous, mysterious woman who destroys men; both, tellingly, see her as Eve and the Baptist’s murderess Herodias. That list of names also recalls Kundry’s reincarnations in Parsifal; she, the primeval devil-woman, the rose of hell, was once Herodias and Gundryggia. So, too, Mona Lisa, Eve, Helen, Semiramis, Bath-Sheba, and Cleopatra may all be incarnations of Woman.

To see Mona Lisa as the eternal female, though, is to fall into her husband and the lay brother’s error of objectifying her, rather than seeing her as a person.

The audience understands that she is not a temptress, but a woman unhappily married to a brutal husband: a rapist who “likes it when a woman would deny herself, As well you know it heightens my desire…”, and a collector.

Francesco prizes Mona Lisa as a beautiful thing he owns, esteeming her beauty as much as he does the pearls he makes her wear to “cure” (restoring their lost glow) or the jewels in his treasure room where Giovanni dies. He is, in his aestheticism and jealousy (the collector’s mania), a cousin of Browning’s Duke of Ferrara, who felt his wife smiled too much – and made sure she smiled only for him.

The Duke gave orders, and all smiles stopped – but the Mona Lisa smiles her enigmatic smile forever.

In the First and the Last Scene

In the Other Scenes

Inhabitants of Florence – Nuns of Santa Trinità – Monks of San Marco, among them Savonarola – Servants

The action takes place in Florence.  The first and last scenes occur in the present time, the others toward the end of the fifteenth century.